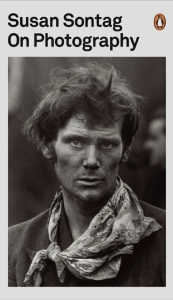 I am reading Susan Sontag’s seminal book On Photography from 1977. It’s interesting reading the book in an age where the act of photographing the world has exploded beyond what Sontag could have imagined – even though her critique of everyday photography takes the mass proliferation of the acquired image as its starting point.

I am struck how social media in general, but especially the tweet or WhatsApp, Instagram or Snapchat message, have directly replaced the role of the photograph in everyday life. As you read the following, replace ‘photograph’ with ‘tweet’ (etc.).

“A photograph is not just the result of an encounter between an event and a photographer; picture-taking is an event in itself, and one with ever more peremptory rights—to interfere with, to invade, or to ignore whatever is going on. Our very sense of situation is now articulated by the camera’s interventions. The omnipresence of cameras persuasively suggests that time consists of interesting events, events worth photographing. This, in turn, makes it easy to feel that any event, once underway, and whatever its moral character, should be allowed to complete itself—so that something else can be brought into the world, the photograph. After the event has ended, the picture will still exist, conferring on the event a kind of immortality (and importance) it would never otherwise have enjoyed.” (P. 11)

The act of social mediation, in its various forms, is ‘one with ever more peremptory rights’… Positively, the act of acquisition is an intervention that, with critical decisiveness, demonstrates the learning agency afforded by social media.

an open-access journal of learning, teaching, and technology

Beatriz Acevedo on Living a beautiful and creative Life

Helping you get started using social media for learning, teaching and research

A blog about my open learning experiences ... and a few other bits of ordinary life

Learning, Teaching and Educational Technology news from the School of Arts & Humanities at NTU

ponderings from the world of educational technology in HE

A place for play in Higher Education ..
Stumbling with Confidence

Paul Kleiman's fragments at the edge of creativity, chaos, education and the life academic

life as a designer.

Zest for Learning... into the rainforest of teaching and school leadership

home at last - for all the mes