Blogging as a site of embodiment, co-production and enculturation 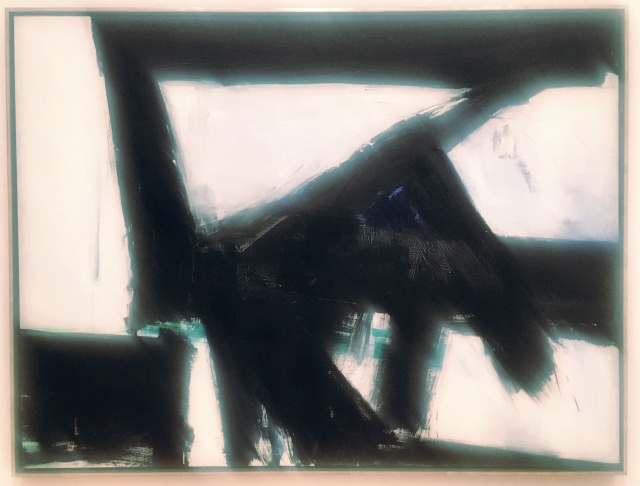 Franz Kline – I read Kline’s paintings as armatures or structures

In this post I look at blogging as a studio space by reflecting on how and why I blog. A study of studio is a study of embodiment: the “embodied occupational engagement in constructing meaning [and how] the occupations in which we choose to engage are shaped by our pre-existing occupational being. The doing and being of a group or population reflects its communal ‘culture’”. (Bilandzic & Johnson, 2013 p. 249)

One way of understanding ‘studio’ in this context is as a ‘site’ or situation in which there is a ‘connected production of things’ (Hennion & Farias, 2016). It is a sociomaterial construct in which there is an entanglement of factors. Actor-Network Theory (ANT) (Latour, 2005) and Assemblage Theory (Delanda, 2016) are helpful for understanding why sociomateriality is useful for analysing the blogging space. Blogging, as with other social media, or other types of mediating space, can be understood in terms of “infrastructure as a sociomaterial assemblage, an entanglement, with scholarly learning, teaching, institutional agendas, architectural intent, technology, staff, students, pedagogic outcomes, and built form [with] all participants in an active symbiosis of becoming” – a relational ontology (Acton, 2017) in which learning is a synthesis of a student’s spatial experience.

I explored co-production in the previous post where I set out a number of core principles derived from the work of Edgar Cahn and others who have gone on to build upon Cahn’s idea of the core economy (Cahn, 2005; Filipe et al., 2017; Humphreys & Grayson, 2008). The essential idea of co-production is one of free exchange for mutual benefit. It recognises the value that any of us bring to a situation or problematised event, whether that is knowledge, skills or, more simply, time and interest.

That idea of reciprocity is interesting when considered in the context of ANT in which many of the actors are non-human. I hope to explore this in a future post.

Distributed cognition (Gieri & Moffat, 2003; Hutchins, 1995) offers a theoretical explanation of how learning happens in a networked environment. It considers how collaboration takes place across individuals, artefacts and internal or external representations as one cognitive system. The idea of distributed creation takes this further and allows for “the active and enabling role played by the materials and technologies participating in creation processes…” (Faria & Wilkie, 2016 p. 5). They share, with ANT, an appreciation of the non-human factors in a process, and are useful for understanding studio, not as a built environment, but as a dynamic context for learning.

If I am using the lens of co-production and the concept of studio, the obvious starting point is to look at who is the ‘other’. ANT provides an answer and reveals that there are many ‘others’ – the human as well as the non-human objects, ideas, and process actors. I define ‘other’ here, then, as those mediating forces that shape my blogging practice. Here are a few examples: myself; those who subscribe to my blog; those who may subscribe to my blog in the future; those who may find a blog post by stumbling across it; the Tactile Learning blog itself as a self-referential actor; any other post with specific connections e.g. on studio or co-production; other people and blogs, books and their authors (etc, etc) that have or may have a bearing on a the topic in hand, or that I may imagine to have a bearing on the topic in hand.

The idea of blog as studio can be seen as a busy space of co-operation (as in mutual association and intersection) therefore. While not necessarily laboured, every word and image can be considered in that context, with consideration also given to how they establish associations with any other components*: self, people as individuals and as networks, digital and physical artefacts, and so forth; and all of this vibrant, if not sentient. These components exist, or rather live as continually changing constellations of components or actors. (Smirnoff et al., 2017; St. Pierre, 2011) (*components is the term used in assemblage theory to describe the emergent entities that coalesce to form the assemblage.)

ANT and Assemblage Theory are analytical frameworks and have a tendency to depersonalise the construction being examined. Acton (2017) cites Kincheloe’s (2003) idea of critical ontology which offers a way to better “‘explore what it means to be human and to negotiate the social and ideological forces that shape [my] pedagogical consciousness.'” For both, it is about finding a way to explore “‘the ways power shapes us, the ways we see the world, and the ways we perceive our role as teachers.’” For me, blogging as a critically ontological act is also about understanding myself, but mostly it is about understanding studio space, for example blogging as an example of a constructive learning space more generally, not necessarily one that the teacher imposes on a student, but one that the student as learner experiences and (literally) comes to appreciate. For me, ‘studio’, as represented by the idea of blog, is an expression of a coming or a commitment to understand the intrinsic meaning and value of the space. I am interested in studio, and space more generally, as sites that promote the co-operative exchange of challenge in balance with support: challenge as an imposition of constraints, traditions and risks, such as personal or professional exposure; and, support as legitimation or as a constructive frame.

Challenge is also evident in Schon’s (1985) notion of studio as ‘problem setting’ and this presents the idea of studio and blog as ‘stage’ for an event involving actors in a moment; a moment being transitory and temporary, albeit persistent when understood simply as a legacy artefact with latent value.

My appraisal is that blogging, like painting, like writing music (other forms of studio space I use), can be an intensely lonely space; even, and perhaps especially, when other people are co-located. It can feel like the antithesis of that notion of busy co-operation I mentioned. It is a place of productive struggle and always potentially an alienating take on the idea of Zone of Proximal Development (Vygotsky, 1978) where the learner’s uncertainty can obstruct their reach to knowledge. Nevertheless, blogging is a space that I come to that serves a purpose for me, or at least challenges and has expectations of me. It is a space I am responsible for. In the past I have run many other ‘studios’ – podcasts, blogs, hashtags, networks – which make demands on me in a mutually beneficial, if challenging, productive relationship.

Beyond the loneliness and sense of responsibility, the space is open and, in many ways, apparently undemanding; the archetypal blank canvas. It is a space I chose and to which I return with no real obligation. It is a space in which I make marks and respond to those marks, and see the ‘painting’ grow in relation to other recent works or works from years ago, and indeed those works I have in mind to pursue in the future. It is also a space for creating works in public – and this notion suggests it is not a studio (Farias & Wilkie, 2016). Though, like a studio, it is a place of ideas, proofs, trials, and tests that may involve “times, moments and precise people gathering.” (Hennion & Farias, 2016). Like studio (and unlike the lab), the blog is not a space of resolution.

How and why I blog

Returning to my key questions, I value blogging as an accessible and challenging space. I have been blogging in various places prolifically since 2004. Blogging creates a frame or a semi-constrained structure in which I interrogate and creatively unravel problems to not necessarily find or offer solutions, but to discover personal insights that may have value to others: my future self, or other readers.

I do this in different ways. In the past I would use blogging more as a space for reporting, sharing information, and reflecting on innovation (e.g. Reflecting on Educational Podcasting), but increasingly the space has become one for constructing and testing my ideas and my own understanding. As such, blogging is a risky space and a lonely space: a paradoxical space for learning through jeopardy. I am conscious, for example, when I talk to other academics about blogging that most professional people would regard exposing one’s ignorance, and even one’s act of learning, as foolhardy: ‘professional suicide’ is a term that springs to mind. Paradoxically, rather than death by my own hand, my blogging exemplifies another artistic virtue; that of life-affirming transgression and defiance. I was trained as an artist and, as Orr and Shreeves (2016) explain, studio spaces and their signature pedagogies train creatives to fail safely by taking and navigating risk defiantly.

My aim as a blogger is not to report, but to think through and construct ideas that have little certainty for me and, using what I know and what I seek out, I construct misshapen armatures upon which I attempt to construct and form a body of cohesive knowledge. This post is an example of that. It is incomplete, put together quite quickly, identifying further unknowns and routes for continued exploration, forming a constellation of ideas, some of which may have some use to me/others.

I have learnt a lot from writing this. That’s the point of the studio. This post, like much of my thinking, is situated within a hypothesis of ‘studio for all’ – that is, the idea of studio as a learning space comes from traditions associated with art, design and performance but its rationales and practices have values for all. By writing this post, and reading around, I have reflected on the importance of enculturation and embodiment. Many art lecturers deny they teach and, in so many words, explain their practice as enculturation through the affirmation of values and traditions (Orr & Shreeves, 2016). There is also the idea of disposition and questions about nature and nurture (Barnett & Coate, 2005). These ideas make me question whether studio can be for ‘all’, although many concepts touched on in this post and in my own emergent idea of ‘studio’ are pedagogically universal. Undoubtedly, as a blog post, I have raised further questions for myself that require me to find out more.

Farias, I. & Wilkie, A. (2016). ‘Studio studies: notes for a research programme’ in: I. Farias and A. Wilkie, eds, Studio studies: operations, topologies and displacements. London and New York, Routledge, pp. 1-21.

Hennion, A. & Farias, I. (2016). ‘For a sociology of maquettes: an interview with Antoine Hennion’ in: I. Farias and A. Wilkie, eds, Studio studies: operations, topologies and displacements. London and New York, Routledge, pp. 73-88.

Latour, B. (2005). Reassembling the social: an introduction to Actor-Network-Theory. Oxford: Oxford UP.

Schon, D. A. (1985). The design studio: an exploration of its traditions and potentials. London: RIBA Publications.

1 Response to Blogging as a site of embodiment, co-production and enculturation

an open-access journal of learning, teaching, and technology

Beatriz Acevedo on Living a beautiful and creative Life

Helping you get started using social media for learning, teaching and research

A blog about my open learning experiences ... and a few other bits of ordinary life

Learning, Teaching and Educational Technology news from the School of Arts & Humanities at NTU

ponderings from the world of educational technology in HE

A place for play in Higher Education ..
Stumbling with Confidence

Paul Kleiman's fragments at the edge of creativity, chaos, education and the life academic

life as a designer.

Zest for Learning... into the rainforest of teaching and school leadership

home at last - for all the mes